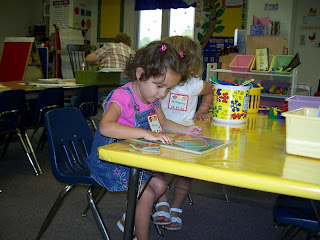 Until recently, all we could get out of Anna as far as what she did at preschool was, "I listened!"  Either it's the most boring preschool on earth, or they actually do more than sit and listen, and Anna was just holding back.

I was surprised to get a few more details when I asked her the other day what she did at preschool.  She said she fell down and cried.  We couldn't figure out what actually happened, but she said something about the kids running into her and making her fall… then she mentioned something about some boy named Jackson making her fall.  Or hitting her, or pushing her.  We never figured it out.

Then today, I sat down on the floor with the girls, and Anna said, "criss-cross applesauce."  I guess that's today's version of sitting "indian-style," according to Beth.  I wonder what the next version will be once applesauce enthusiasts become offended by that phrase.  Anyway, Anna then sat across from me and held up her hand, holding something imaginary, saying something I couldn't hear, then placing whatever it was into one of three apparent slots on the couch behind her.

After a few minutes, I figured out that she was holding up either a letter representing someone's name, or maybe it was a card with someone's full name.  I think it was supposed to be randomly picked from a jar or something. She would then ask, "Whose name is this?"  Then that card would be placed in one of three "job" positions for the day: line leader, snack helper, or doll holder.  Anna went through assigning me, mommy, and Cara jobs.  I had to be the doll holder.

…actually, now that I think about it some more, I wonder if it's really DOOR holder, even though Anna is clearly saying "doll…"
Posted by deltamike76 at 2:32 PM