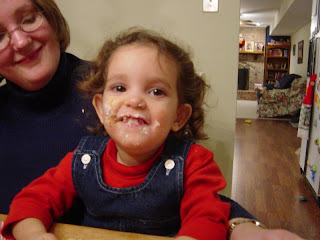 Cara and I celebrated our 2nd birthday together this past Tuesday, 2/26/08.  Since we have the house listed (and ready to be shown at any given moment, as much as possible), we kept it very low-key this year so as not to have the house torn apart by a mob of kids.  Who knows, maybe we'll have an "unbirthday" party for her that's bigger once the house sells (or we give up and withdraw it).

Like last year, we had cupcakes.  As you can see from the picture, Cara liked hers.  She ate it straight off the table, like a horse.  Anna again helped me blow out my candles, then she had to make sure all the frosting was licked off the candles.  She's learned how to do a somersault and likes to show us.  Cara, of course, doing everything Anna does, also wants to show us her "somersaults," which are just her putting her head on the ground, then laying on her back. 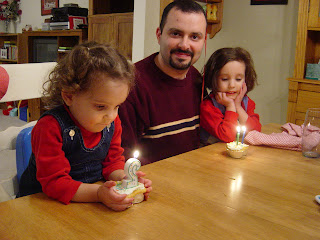 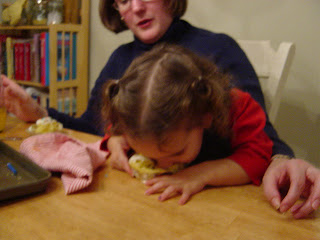 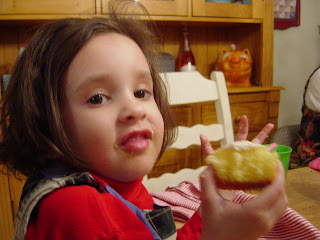 Well, it was bound to happen.  Cara discovered an unattended tub of butter, and she was in heaven... 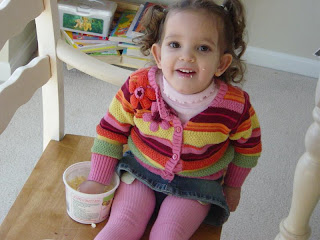 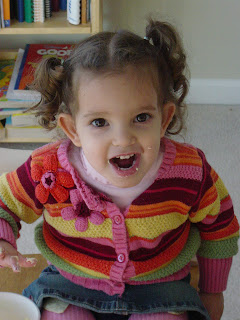 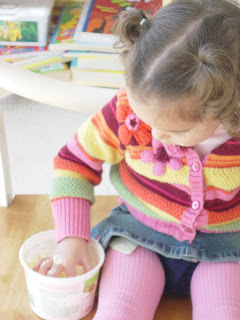 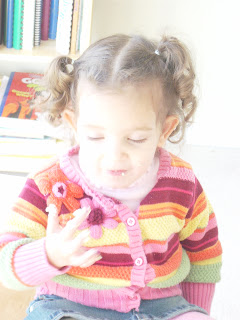 Today we were out and about with the girls, and on the way home we decided to get some gas and a car wash, since the car was very salty.  It was a touchless car wash, so there were no scary brushes whapping against the windows or breaking our antennas.  The first couple passes of the bar just lightly sprayed soap onto the car, and the girls were enthralled watching it, almost enjoying watching it.  But then on the 3rd pass, which was the first rinse, the bar was spraying water rather hard, and that's when the Anna got scared, covered her ears, and said she wanted us to leave.  I think Cara was actually ok until she saw Anna scared, then Cara started crying.

It reminded me of the scene in Raiders of the Lost Ark towards the end, when they've opened the ark, and one of the ghosts comes up to the main bad guy after someone else had proclaimed, "It's beautiful!" [the light soap spray] Then the ghost suddenly turns into a scary demon, the horror music starts blaring, and everyone is screaming in terror [the rinse]. 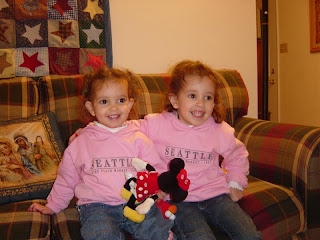 It's been awhile since I've posted any updates.  Things have been very, very busy at our house.  Lots of things around the house that needed to be done to list it.  At least one of us has been sick pretty much since December.  I'm only now actually feeling "normal" without the congestion, coughing, and runny nose that I've had since mid-December.  We're all finally healthy again.  Beth has been very busy coordinating the MOPS group at our church.  The girls have been very busy themselves, playing, going to preschool, making messes. 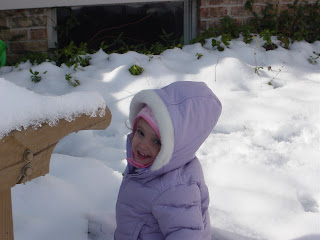 Cara really does anything and everything Anna does.  If Anna tells me anything, Cara comes right up and says the same thing. Though she still talks like a baby, we can understand the words she's saying most of the time.  She's still in love with butter and would eat it by itself for every meal if we let her.  The other night, we had crescent rolls, and she, of course wanted butter on hers.  Then she went ahead and pinched all the butter off the roll with her fingers and ate the butter straight.  Don't worry, though, she still eats very well, and she'll eat your dinner after she eats hers, so be sure to have extra.  She'll even catch you if you have something in your mouth - I tried to eat some Whoppers candy without her knowing.  I put them in my mouth behind a door so she wouldn't see, but then she saw me chewing and kept pointing to my mouth saying, "Want some! Want some!" 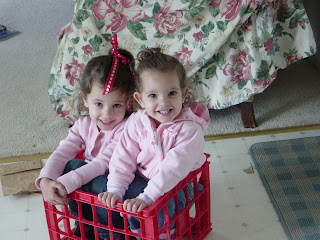 Cara is also starting to potty train and desperately wants to wear panties like her big sister.  She's used the potty successfully a few times, but is still learning.  She also likes to jump on daddy's belly now, but only for a minute; then she wants to be held upside down, just like I do with Anna.  She then repeats over and over, "Ook meeee, Anna! Mommy, ook meee!" telling everyone to look at her upside down.  Almost daily (and Beth might say many times in a day) she asks for "Hoasie Wide," aka "Horsie Ride," aka the William Tell Overture, so she can run around and around.  When it's time for bedtime, she's protesting now, saying "No - no stowees!" (no stories), "No, no naps!" and "No, no bet!" (no bed).  But fortunately she's still easy to put to bed. 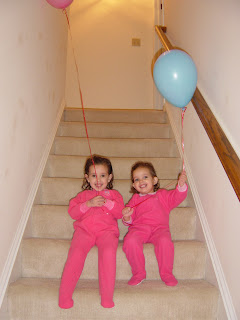 Anna still loves her snowman jammies very much.  Just tonight she asked for them specifically and cried when we said not tonight, but tomorrow she could wear them. She wears the snowman jammie slippers faithfully, though.  She's made lots of friends at preschool and talks about them a lot.  She gets very excited when they come over to play or when she gets to go to their house to play.  She really likes when our photo gallery screen saver comes on and she can watch the pictures.  She remembers Titi Toni and Titi Edna very well when the Orlando reunion pictures come up.  She also loves the Curious George blanket that Aunt Raquel made her for Christmas.  She frequently insists that it's the one and only blanket she wants to cover her at night. 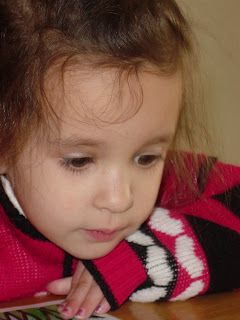 She understands the idea that we're trying to go live near Mama Jet and Papa Nick's house. She gets very excited when she thinks about it, and frequently reminds us that we're going to do that, and that someone has to buy our house first, then we can move.  She's visiting them with Beth in late April (Beth's helping her mom organize a yard sale). When we ask if she wants to fly on an airplane, she says no, "because I'm too big!"  I didn't understand what exactly that meant until Beth pointed out that whenever she's actually seen an airplane, it's been very small from being so high in the sky, so Anna must think that she couldn't possibly fit into that tiny little airplane.

I've been quite busy myself between home, the girls, choir, and especially work.  I'm the only person that has been developing the mission planning software (MPS) for two satellite missions being launched this year and flown by Orbital Science Corporation in Dulles, VA.  To really simplify what MPS does: it is a tool used in the mission operations center (MOC) that repeatedly analyzes the predicted satellite orbit and assembles the nominal command loads that get uploaded to the satellite for execution, checking for conditions that might damage the satellite in some way.  I really could have used another developer to take some of the workload (the original plan), but since that didn't happen, just about every MPS-related question or task falls on me, for either mission, and recently from several groups with Orbital looking at possibly wanting their own customized MPS for upcoming missions. The two missions for which I'm currently developing the MPS are:
I also traveled to Seattle for a work-related seminar earlier this month, which explains the Seattle shirts you might see the girls wearing in some of the pictures in our gallery, which I've updated with some new pictures, by the way (Day-to-Day, 2007-2008 Winter).

Well, that probably brings us somewhat up to date for now.  I'm sure there are things that have happened in the last month that I've forgotten and didn't have time to sit and write.  Maybe things will slow down enough I'll be able to write more often.  Or maybe I'm kidding myself…!
Posted by deltamike76 at 6:00 AM No comments: