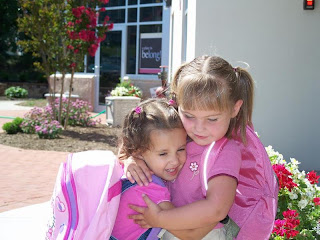 Anna's first day of preschool was on a Tuesday. Since she only went once that first week, I told her after bedtime stories the following Thursday that she could go again in 5 days.  She replied that no, she would be going in two days.  When Beth tells her after school on Tuesday that she can go again in two days, Anna says, no, four days.  We think that she originally heard Tuesday as "TWO's day," and has named most days of the week using a number.  It probably didn't help that Monday can sound like "ONE day."

It's interesting she assigned "FOUR days" to be Thursday, two days after TWOsday. But I don't think she's that clever just yet… today I said she could go again on Thursday, and she said no, in six days.  Who knows what the logic is - but I'm sure it makes perfect sense to her!
Posted by deltamike76 at 11:15 PM