Made it to Orlando 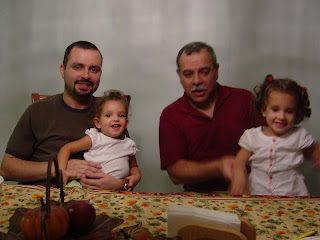 We arrived at our villa in Orlando around 4:45pm.  The girls were happy to be free of their car seats, and they went through their ritual of jumping up and down on mommy & daddy's bed.  After unloading, we headed over to Uncle Curt & Titi Toni's house to meet dad and Christine.  It's a very nice house right on a little lake at the end of a cul-de-sac - Sea World is only 1 mile away, and Disney only 5.

The girls got to meet Abuelo, and really enjoyed dancing with him to his oldie goldies, getting picked up and swung, and chased around and around the table.  After Christine gave us the grand tour, I got to chat a little bit with her as we went to the store to pick up some mac & cheese for the girls.  Later Curt, Christopher, and his friend Nicky (sp?) arrived - Christopher looks to me like a musician, no question. Apparently dad had said the same thing.  He and Nicky played some songs for us on his brand new keyboard and a drum set.  Very talented, I have to say.  I was impressed.

The girls had big fun playing with an ice cube in a cup (they are sometimes easily entertained), and I was happy to get some pictures of them with dad, Christine, Christopher, and Curt.  Titi Toni had to work and wasn't able to get home in time before we took the girls to bed, and Titi Edna and Abuela weren't arriving until late tonight, but we'll get to see them tomorrow.  The girls were REALLY tired (they haven't had a nap for 2 days now) and it was just a little difficult to get them to feel ok going to sleep.

I've got many pictures besides the one included in this post (and I'm sure will get many more during the week). I plan to post them in our photo gallery when we return to Maryland, and if I have time, maybe I'll post some of them earlier, but right now, time for bed!

Oh, one anecdote I forgot to jot down from our hotel stay is that Anna really liked pushing the buttons for us to ride the alligator (elevator) up to our room.
Posted by deltamike76 at 11:46 PM