The door that can immobilize children 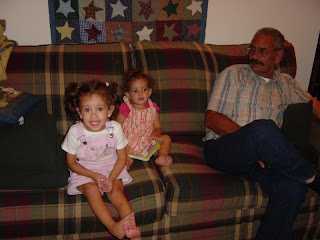 The girls have this little thing they do that I wish I could get a video of, but since it's always too dark and you're trying to get them to go to sleep, it just wouldn't work.  If you put them down to sleep, sometimes you hear them start to play in the monitor.  Anna has only ever gotten out of her crib and into Cara's crib once, on the first night we changed her crib to a toddler bed. Since then, she has stayed in her own bed like she's supposed to (as far as I know, anyway!).

Anyway, if you hear them playing after you put them down, they're both probably still in their beds.  Cara will just be standing in her crib talking to Anna, and Anna will be standing or sitting up in her bed talking back, and both giggling over who knows what.  When you open the door, they immediately know why you're back in there - you almost don't even have to say a word.  Both of them will literally freeze wherever they are in their beds, and immediately flop down into a laying down position (no matter how uncomfortable it looks), as if you had just emitted some magical burst of power that sapped them of all muscle control which would have allowed them to continue standing or sitting up.  It's hard to describe other than to say it looks like they just fall dead as soon as you open the door.  It's pretty funny, though.

The picture in this entry, by the way, is completely unrelated to this story.  Cara had been sitting on the couch next to Papa Nick.  I was taking a couple pictures of her.  Anna saw this, stopped playing with her PlayDough, and had to come over so I would take a picture of her.  So there she is saying "cheese!!"
Posted by deltamike76 at 11:14 PM