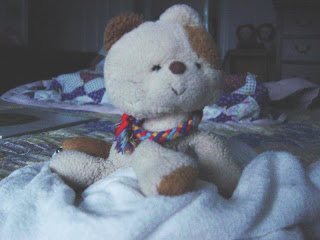 As I've mentioned in a previous post, Anna has an absolute favorite companion - kitty and blankets (or "keelee and blankets" as she calls it).  The "blanket" is just a cloth diaper, and there must always be two, otherwise it's not right.  The only, and I mean only, time she has ever parted with kitty & blankets was the night after we returned from our trip to Sesame Place, and she wanted to sleep with her new Big Bird doll.  That only lasted one night, though.  Kitty even poops now - Anna will make straining sounds, tell us that kitty's poopy, hold her nose and tell her she smells, and go take care of her diaper.

Anyway, Cara is fully aware that kitty & blankets is sacred to Anna.  This, however, doesn't translate into Cara respecting Anna's most cherished possession.  One of Cara's favorite games is to secretly snatch away kitty & blankets while Anna is distracted with something else and run off with it with big giggles.  When Anna realizes that Cara has kitty & blankets, she starts running after Cara to get them back, and Cara runs even faster and at the last second will throw kitty & blankets in one direction while retreating in the other, like a submarine launching countermeasures for a torpedo.  Other times she'll show me she has kitty & blankets, but when she hears Anna's footsteps approaching from around the corner, she'll throw them to the side as if she never had them.
Posted by deltamike76 at 3:00 PM