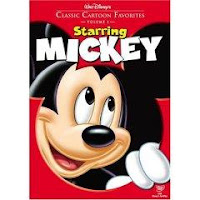 We're very much looking forward to our trip to Orlando next month.  We got several "old school" DVDs of old Disney cartoons - Donald Duck, Mickey Mouse, Minnie Mouse, Goofy, Chip & Dale, that the girls like to watch, and they're excited to see them "in person."

Anna says it correctly now, but early this year she pronounced "Mickey Mouse" as "Buckey Mouse."  I was able to capture it while Anna was talking to Titi Toni on the phone about coming to visit:  Listen to Anna & Titi Toni discuss Buckey Mouse.

FYI, during that conversation we figured that when Anna was talking about "big drum," she was telling Titi Toni either about the bear & his drum from a Little Einstein video, or she was talking about The Little Drummer Boy, which was her all-time favorite song for awhile.  Also, when she goes off about Gracie, and "this button, and this button," (pointing to buttons on the phone), she was just very excited about going to see Buckey Mouse and was just talking about anything that popped into her head.
Posted by deltamike76 at 10:53 PM