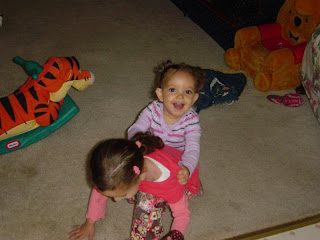 We were riding in the van this past Sunday, stopping at a few stores. To keep Cara occupied, we gave her a little bag of marshmallows.  Anna loves marshmallows and wanted some, so we told her to ask Cara for some.  She kept screaming and saying she wanted a marshmallow, and we kept telling her to ask Cara nicely for some and stop screaming.  It only seemed to get worse.

Beth finally discovered what the problem was.  Anna was asking Cara nicely for marshmallows.  Cara would then hold out a marshmallow for Anna, but before Anna could take it, she would take it back and eat it, then laugh.  Anna apparently did not find it as funny.

I don't know where Cara might have gotten such a mean streak.  I never did anything to torment my little sister.
Posted by deltamike76 at 11:19 PM