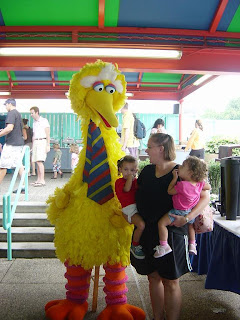 On day 2 of our trip to Sesame Place, we went to the park early to dine with Cookie Monster & friends. Yes, it was expensive, and yes, the food wasn't fantastic. But it was for the girls, and they loved it. You eat in a pavilion, and for the entire hour you're there, all the Sesame Street characters are walking around, and will sit down and interact with your kids. We got a picture with Cookie Monster as we went in, and as we had breakfast, Bert, Ernie, the Count, and Cookie Monster stopped by the table. 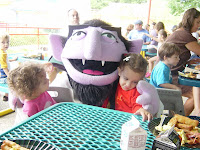 Ernie even fed Cara a bite after Cara tried to "honk" his nose. I tried to tell Anna that Ernie wanted her to eat her breakfast, and Ernie tried, too, but even Ernie couldn't defeat Anna's pickiness. Big Bird was there, too, but you had to go see him yourself - I guess his costume was too big to walk around to all the tables. When we were leaving the pavilion, Anna told me she "really liked seeing her Sesame Street friends."

We spent the second day doing the water things. The water was freezing cold, but the girls didn't seem to mind. It wasn't so bad once you were numb. There were little wading pools for the small kids and a little wave pool. We spent some time walking through the pools, then I took Anna on a water slide in a two-person tube.

From there we did the lazy river, where afterwards I was told that when Anna says she needs to poop, that means she's already pooped, so I had floated around the whole lazy river with poop in my lap. I had told her she can poop after we were done with the river, because she had told me she needed to poop right before we got in, after waiting in line for so long. We both lived.

After the lazy river, we took the girls over to a little area called Ernie's Waterworks. It was a very cool area where basically all this mechanical-looking stuff has water coming out every which way, and there's fountains coming out of the ground, and out of pipes, and down tracks that you can dam up, and shooting over your head, and you can just walk through the whole thing. Both the girls had a lot of fun at that one - although Anna didn't particularly like when she was looking at one of the fountains coming out of the ground, and a little boy ran up and smacked the fountain right into her face. 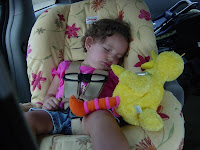 We called it a day after that and started to head out. After changing into dry clothes, saying goodbye to our "human" friends (who were staying another night) and to our Sesame Street friends, we packed the kids in the car and started driving home. Cara was out before we even got back on the highway.  I'm pretty sure Cara won't remember much of this trip (that's ok, she was free!).  But I hope this trip made its way into Anna's fun childhood memories that she'll keep around for a long time. 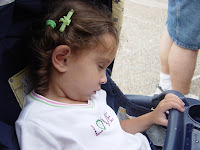 As of today, I've posted the digital photos we ourselves took at Sesame Place. They're in the photo gallery, under "Vacations and Trips -> 2007 Sesame Place."  We also have some pics to develop from a disposable water-proof camera, and we'll be getting more digital pictures from Kyle & Becky soon - I'll post another entry letting you know when there are more pictures to see.
Posted by deltamike76 at 3:00 PM