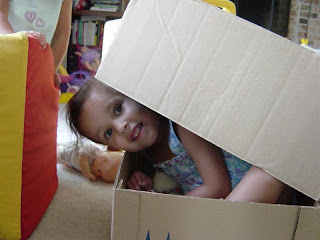 It’s funny what kinds of things seem to make lasting impressions on kids.  I took this picture when Anna was sitting in a box, and using another box to cover her head, announcing that she was an egg.  Did she really pay that much attention to the egg carton from the grocery store?  Here are some other things that have apparently had big impressions on the kids:

Anna doesn’t seem to mind going to the doctor, at least when there’s no shots involved.  But she really has the wellness check-up down pat.  I will get my own wellness exam.  She will use something that resembles a stethoscope (like a ribbon or an undone fake necklace), place one end in her ear, and procede to place the other end on various parts of me, uterring “mmm hmm!…. mmm hmm!” to reassure me everything’s ok.  She will then, with the same stethoscope, check my mouth, my nose, both eyes, both ears, and finally the top of my head, to complete the exam.  Then it’s my turn to check her out, and vice versa, and vice versa again, for as long as I can handle it.

“Gracie pooped on the floor!”

One day, months ago, Beth had gone into the girls’ room to get them up from their naps.  She saw that one of our cats, Gracie, had pooped on the floor, and scolded the cat in front of the kids.  This apparently left a lasting impression on Anna.  She still to this day will tell us either on the potty or at the dinner table, to make conversation, that Gracie pooped on the floor, that Gracie was naughty.  Could this have anything to do with why she’s scared to poop in the potty?  Who knows.

Anna is pretty shy in public, but has no fears about telling Cara what to do at home.  One day Beth told her she was bossy, and that has stuck with her.  She’ll keep reminding us that she’s bossy when we tell her not to push Cara around.

Copying Anna on the potty

Cara is also impressionable - she wants to do everything Anna does.  Cara’s already got the motions down as far as going potty from watching Anna.  She comes into the bathroom everytime Anna does, to observe, then when Anna’s done, will sit on the potty with all her clothes on, clap because she “pee-peed,” get toilet paper to wipe, then try to get a “pee pee pill,” which is just a piece of PEZ candy from a Mickey Mouse dispenser.
Posted by deltamike76 at 11:21 PM