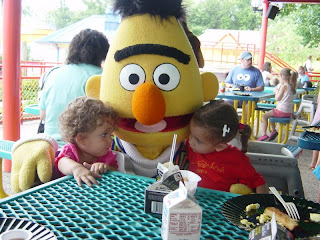 We just got back from a 2-day visit to Sesame Place in Pennsylvania. It's a theme park built entirely around, as you might guess, Sesame Street. All the kids' favorite characters are out and about - Big Bird, the Count, Bert & Ernie, Grover, Cookie Monster, Elmo, etc., and there are lots of fun water rides and non-water rides. We went with our friends Kyle & Becky, whose daughter Rachael is Anna's best friend, and their parents. The girls had huge fun, but the trip sure didn't start out well…

We left Wednesday after I tried to wrap some things up at work to take a couple days off. It was about a 3-hour drive from our house to northeast Philadelphia, where the park and our hotel were. We got this dual-screen in-car DVD player from Sam's, which works really well for trips like this. The drive itself wasn't too bad, except towards the end when Cara decided she wanted down: "Dow! DOW!!!" she would cry, and when mommy told her no, she'd cry, "Daddy… Daaaaddyyy… Dow!!" And when I would say we're almost there but you can't get down, she'd switch back to begging mommy. Meanwhile Anna would be telling Cara to "Shhhh!!" so she could hear her Curious George show. When we got to the hotel and to our room, I think it was around 7:45pm, close to normal bedtime. But the girls were all wound up from having just been set free from their 3-hour car seat captivity, so we let them run around the room and jump on the king-size bed, which was big fun. Also, bumping their heads purposefully on the headboard was also a fun game, as well as daddy trying to grab their feet from the bottom of the bed. We set up the pack & plays - thankfully, Anna was easy to put to bed, even in a strange place. Not Cara. It took a long time to get her to go to sleep - she would be fine if someone were holding her, but as soon as it seemed she'd be asleep and you'd try to put her in the pack and play, she'd start crying. We figured her teeth might be bothering her again, plus she was hungry (but there was no refrigerator and no microwave in the room, so having some warm or cold milk on hand was challenging), plus she's in a strange place… I ended up going to a local gas station to pick up some tylenol at 2am, and I think we all got maybe 1-2 hours of sleep maximum that first night, courtesy of Cara. Anna even told us in the morning that she "didn't sleep good" because Cara kept waking her up.

Arriving at the park 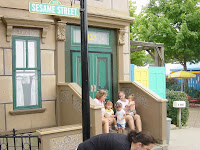 Despite a horrible night and no sleep, we actually managed to have lots of fun at the park. Anna gasped when we approached the Sesame Place gate, and Cara yelled, "Woooow!!!" By the way, Anna is now asking "Why?" about everything, so I had to explain several times "why" I was driving - to get to the park - why? - so we can see Big Bird - why? - because you like Big Bird - why? etc. etc. At the front gate, they took our tickets, searched our bags, and, something I've never seen before at a theme park, they had a machine and captured the fingerprints of all the adults entering the park. 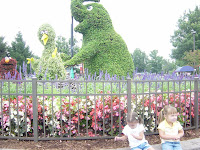 We figured it must be a precaution/deterrent against child predators. As you enter the park, there are some ivy sculptures of Sesame characters, and towards the end of the main street, there's a little section that's built to look just like Sesame Street from TV, so we took some pictures there. Cara was extremely excited to see the Elmo sculpture - I wonder if Elmo is her favorite character because she can actually say his name. We saw the Count as we were walking through. 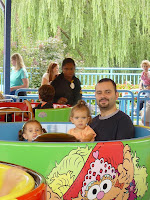 We waited in line for a little thing where the kids take off their shoes and climb up this big blue triangle and slide back down. Anna chickened out at the last minute, though. So instead we went to the spinning teacups ride, and I took both girls. It's hard for kids that little to wait in lines, and I had to explain several times to Anna about how the line worked and that we needed to wait our turn. But once we finally got on the ride, Anna had a big smile on her face, and giggled and giggled as we spun around. I was holding Cara, and she had fun for maybe half the ride, then started making her nervous sound - she made it to the end, though. 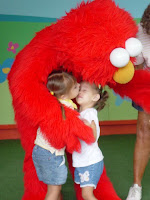 After the teacups, we went to see Elmo. That was a big hit not only with Cara, but also with Anna, who asked a couple other times that day to go back and see him. It's nice that even though the park is trying to make money off the pictures, they let the kids get in line to see Elmo (also Zoe and Big Bird) and hug them for a couple minutes, whether or not you intend to buy the pictu 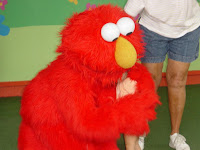 res, plus they let you take your own pictures, too. So we got a few pics with the girls and Elmo. We rode a "balloon race" ride (which is just some cars going around in a circle high up, and you can spin those, too), had some lunch. Rachael bounced in big bouncy area while I took Anna to go see Big Bird. Then we went to get a spot to watch the parade. 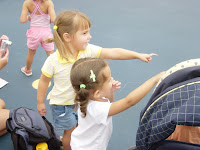 The parade may have been the highlight of the day for the girls. Cara was kicking her feet, and Anna was just so excited - when the music started and the parade was coming, I don't think she stopped dancing. She danced and danced, even dancing in place while waiting for Ernie or whoever to get to our spot from down the street. Beth and I were both almost teary-eyed seeing how happy and incredibly excited she was. I used our camera's video feature to get some video - it's not the 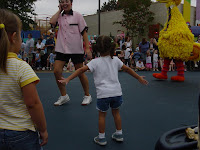 best quality and the movies are too big to download if you're on dialup, but the rest of you can get a glimpse of how much fun the girls had at the parade: 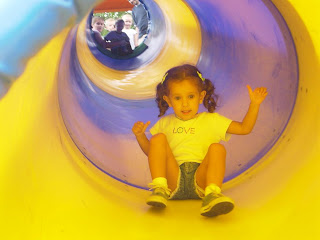 After the parade, Anna asked to see it again. I didn't think I could get them to do the whole parade again just for Anna, so I took her over to the flying fish ride. Another long line, and more explaining about how we need to wait our turn - Anna seemed to be catching on. After the flying fish, I took her to a tall tower with two big tube slides (Anna loves slides). It turned out that these slides weren't much of a slide after all - they were so unslippery that the kids basically had to walk themselves all the way down the tube. It didn't matter to Anna, though - I took her to the top, and she walked her way to mommy at the bottom. And she wanted to do it again, and again… and again… and again - she would have done it all day if we would have 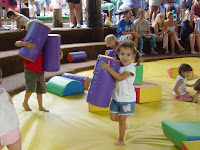 let her. By this time, Cara had fallen asleep in the stroller and was taking her afternoon nap - part of me wanted to say to her, "Oh, so now YOU want to sleep, huh? Let's see how YOU like being kept awake!" But I refrained. We took Anna over to a little play area where you just run around, fall down, jump, whatever you want to do. There were lots of little shapes that you can pick up and throw and carry and roll over. It was right underneath a really tall (maybe 3-story) series of nets that you climb on. I wanted to crawl on the nets myself - it was pretty cool with little net-tunnels going every which way, but Anna didn't want to. Oh well. 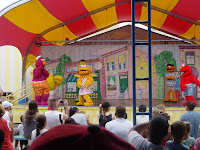 Then we went to see a show. Yep, it was about as corny as you might imagine it being, but Cara was enthralled, and Anna loved it, too. She even got out of her seat and danced in place as soon as the show started, well before the main guy in the show told all the kids to stand up and dance. I don't remember what the show was about, and I'm sure I don't care what it was about. The show for me was watching Anna and Cara having so much fun. 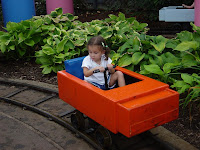 We went over to Twiddlebug land, and underneath the biggest waterslide, there was a little train track, with little one-person cars that you sit in, and you hand pump your car along the track. Anna loved this little train - this was another one she would have done all day long if we would have let her. I had to intercept her at the starting point and make her get out to give the other kids a turn, which was always a bit dramatic. I don't remember how we got her to leave the train when it was time to leave for the day…

As of today, I've posted the digital photos we ourselves took at Sesame Place. They're in the photo gallery, under "Vacations and Trips -> 2007 Sesame Place."  We also have some pics to develop from a disposable water-proof camera, and we'll be getting more digital pictures from Kyle & Becky soon - I'll post another entry letting you know when there are more pictures to see.
Posted by deltamike76 at 2:26 PM