This is Part 7 of my account of our tour to Israel with The National Christian Choir.  This entry begins with our visit to the Church of the Annunciation, then to Beit Shean, Jericho, and finally arriving in Jerusalem with a stopover in Bethlehem.  To start at the beginning, click here.  All my Israel pictures and videos are in the photo gallery under Vacations and Trips, then 2008 Israel.


Day 5 - Church of the Annunciation

We started out the day by visiting the Church of the Annunciation, which is the traditional site where the angel appeared to Mary and announced that she would give birth to Jesus.  I have to say that I was impressed with the churches that they built on many of the traditional sites.  I thought they were beautiful, and they were also great places for our group of 300 to sing in. Since this was where Jesus' name was announced, we sang Holy is His Name by John Michael Talbot - a very nice choral arrangement that sounded fantastic in this church.


As she was walking us out of the church, our guide, Gila, threw her gum away in the ashtray that was by the exit.  Then about 5 steps outside the door, it hit her as strange that the Church of the Annunciation would have an ashtray inside the sanctuary.  Then she stopped in her tracks and ran back inside to retrieve her gum, which she had discarded into the bowl of "holy water."

I took a picture of this building just outside the church on this narrow, cobblestone street because I thought it looked neat.  Reminded me of something you'd see in a movie set overseas.

From the church, we went to the ruins of Beit Shean, which is mentioned in the book of Joshua and is Israel's best example of how Jerusalm looked in Jesus' time.  Again, I did not think ruins would be interesting to me, but they really were.  With a little imagination, you could envision the buildings along the main street.  There was a very large hill, or tel.  Gila told us that there were at least 13 different civilizations buried in the hill (remember it was common for a city to be built, destroyed, buried, then later on rebuilt on the same site).


I wish I could remember who it was, but our guide told us that some prominent Bible character was killed and his body hung on one of these pillars.  I think that it may have been Samson.  Someone will have to correct me if they remember.

Beit Shean also has the remains of a large Roman amphitheater.  The stage floor was rebuilt, as well as portions of some of the columns.  Sitting in the seats, it was easy to imagine how grand the theater must have looked - tall, clean, polished, full of spectators…

We got on the bus and headed for Jericho, which was a good hour away.  This was also the first time on the trip that we ventured into Palestinian territory.  We were warned not to take pictures at the security crossings as neither side particularly appreciates it (you'll see though, that I snapped one or two very discreetly, because I couldn't resist).  We were to have our passports ready in case a soldier boarded the bus, and if he asks anything, simply answer his question in as few words as possible, and don't offer anything more unless asked directly about it. 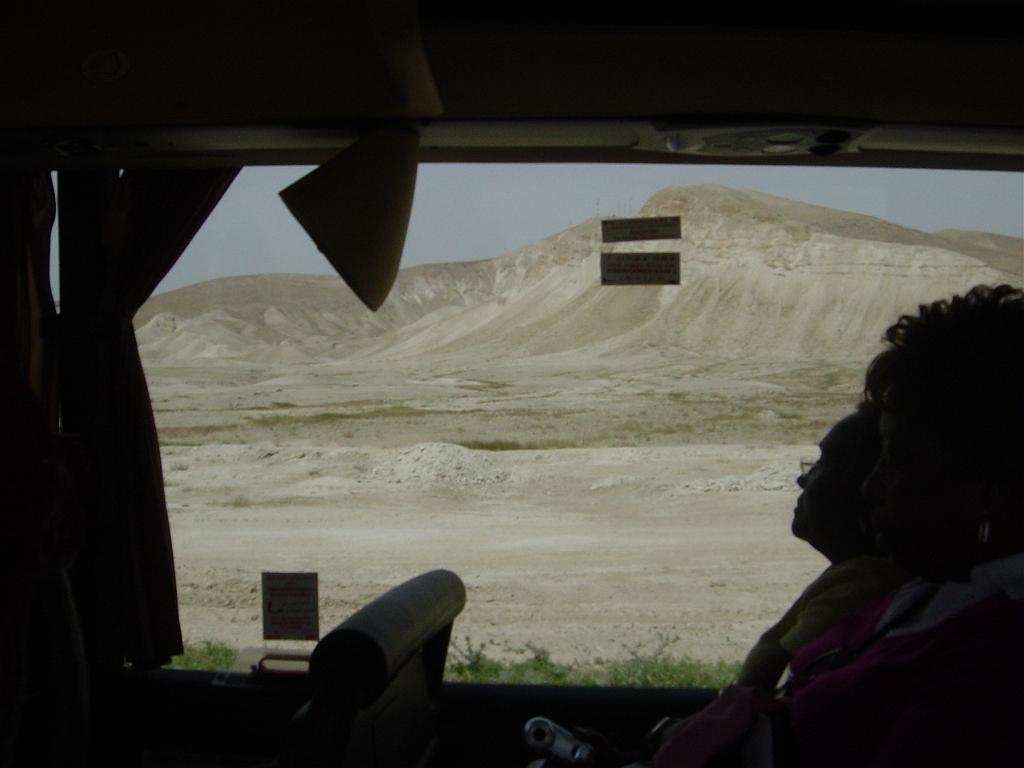 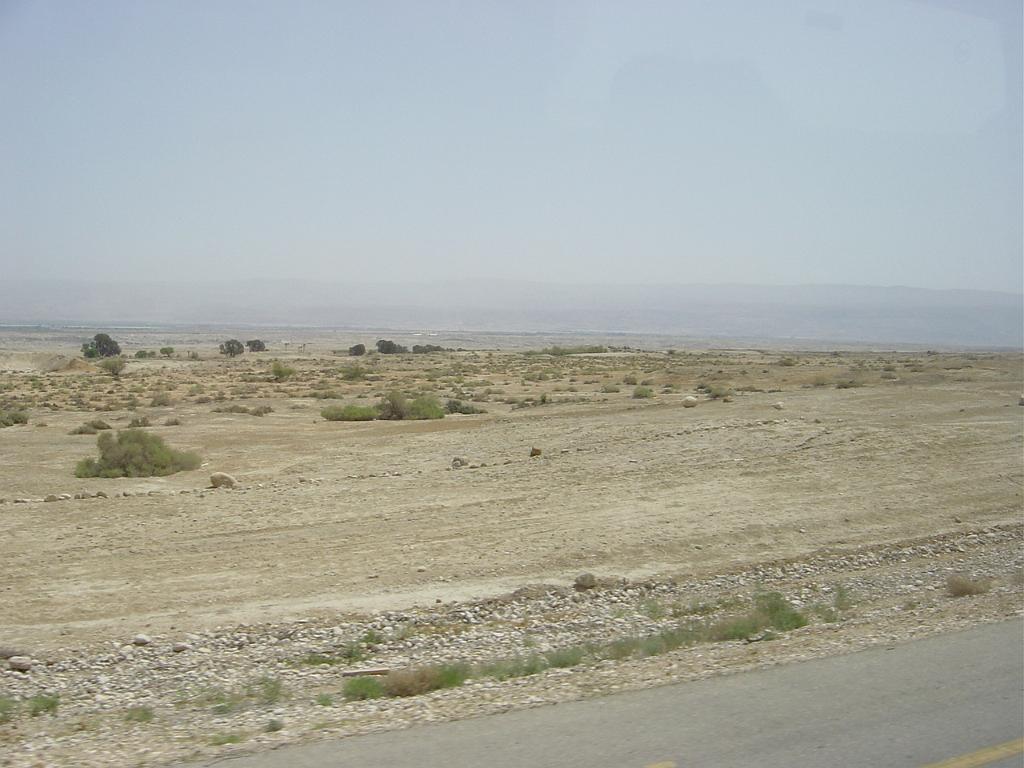 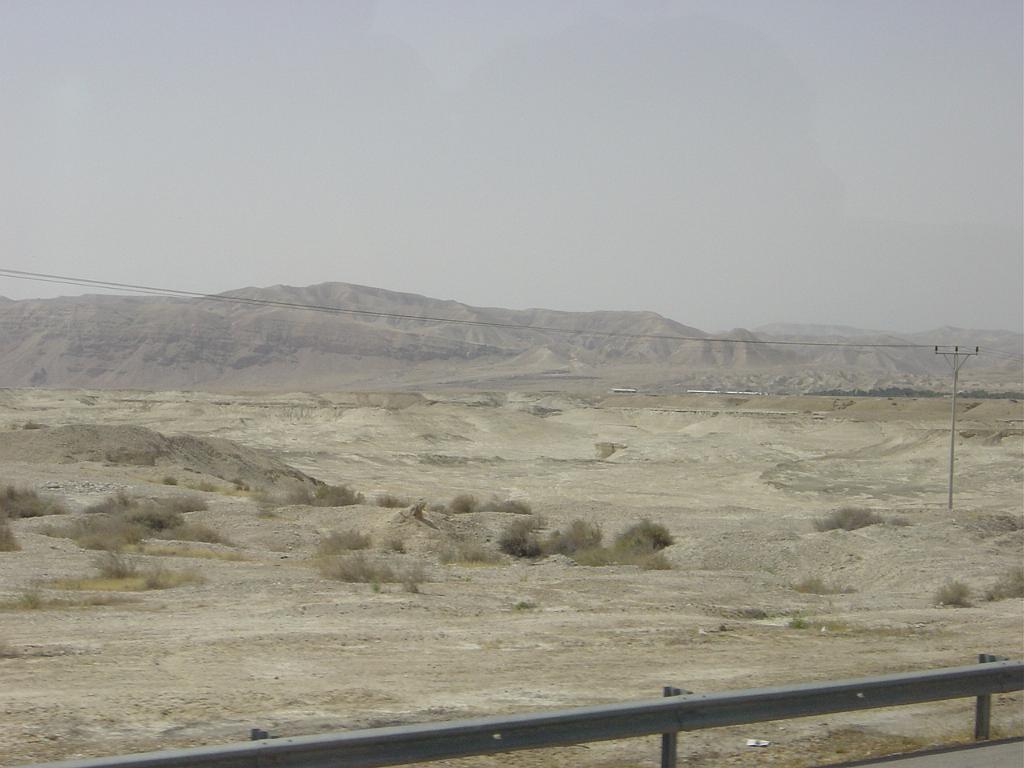 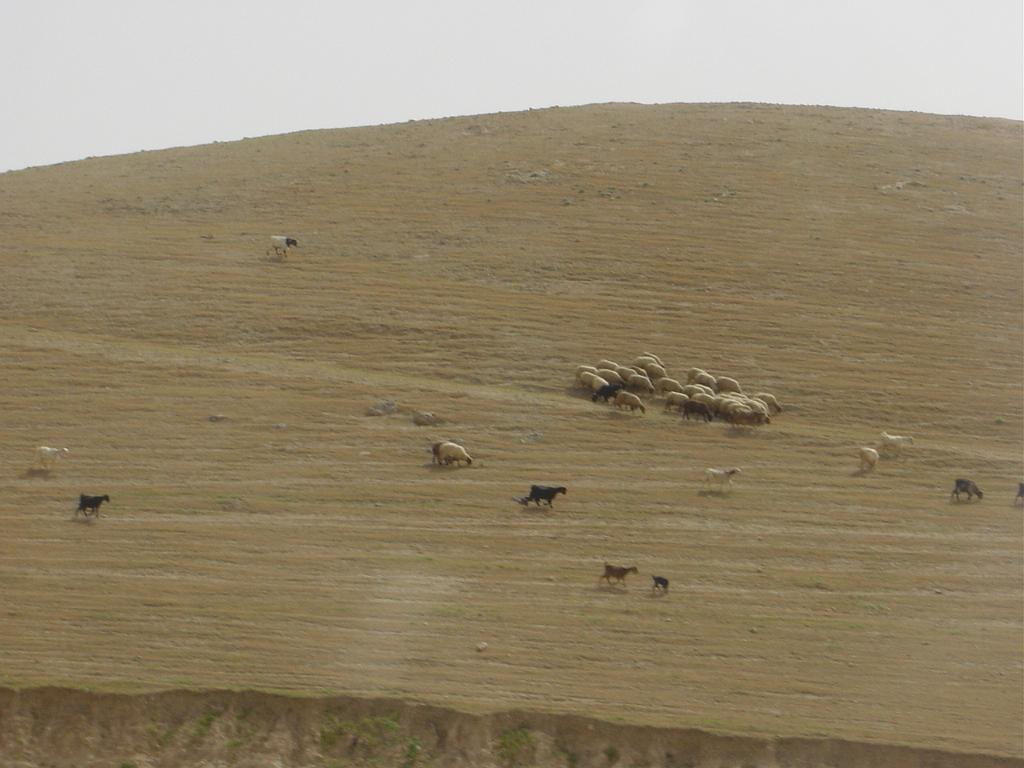 As we drove from Jewish-controlled Israel into the West Bank, I noticed a distinct change in the landscape.  We used to be among lush, mountainous, green fields - very pretty.  After we crossed into the West Bank, everything seem to dry up.  Everything started turning brown, looking dry and barren.  There were still plenty of hills - and valleys, hills and valleys, hills and valleys.  It gave me a real appreciation for what it meant for someone to travel this country on foot or on donkey - the terrain is very difficult and unforgiving.  I couldn't help but wonder if the Palestinians got stuck with the crappy part of the country, and that's why they're so ticked.

This is a picture of the mountain where it is said Jesus wandered on for 40 days, being tempted by the devil.  Next to it is a view of Jericho, which is believed to be the oldest and lowest city on earth.  Notice how it is lush green and full of life - a true oasis in the middle of the desert.  And let me tell you - it was hot, HOT, H-O-T in Jericho.  Dear Lord, it was hot.  It gave me an appreciation for how strong one of the temptations would have been for Jesus, when after wandering on that barren mountain in the hot desert for so long, the devil said he would "give" him "all of this," talking about this refreshing oasis.

Apparently flash floods happen regularly in the desert here when it rains.  There was a ruin of a wall or fort that was built to protect the city from the floods and divert the water.  The Arabs here were actually very friendly and courteous - not sure what I was expecting.  I still felt an overall unease from simply being in Palestinian territory, though.  Not because of anything that happened, but just because of my perception from the media coming in.


Nothing interesting happened to our bus at the checkpoints crossing into/from Palestinian territory, probably due in part to the fact our bus driver was Palestinian.  I was a little disappointed - I was hoping for a good story.  But one of the other buses had one. They were boarded, and the soldier asked to see someone's passport. Some genius asked him if "that gun was real," at which several other geniuses laughed. The soldier then made the entire bus get out, line up, and they checked all of their passports.

One kind of sobering thing we noticed, though, was that our guide, who is Jewish, had to be dropped off before we went into Jericho, for her own safety.  No Israeli citizens are currently allowed to enter Palestinian-controlled territories.  We picked her back up after we left Jericho.

After leaving Jericho, we drove up, up, up towards Jerusalem.  We saw the gold dome on the Temple Mount for the first time, which was neat - we'd only ever seen it on TV or in pictures before.  We passed by the walls of the Old City, which we would be touring later on.

We went into Bethlehem after driving a bit through Jerusalem.  As you can see from the pics below, Bethlehem is controlled by the Palestinians, so we had to go through another security crossing.  Gila once again had to get off the bus before we entered, and a Christian Palestinian guide took her place on the other side.  It was sad to see a very large wall being built right through Jerusalem, to physically separate the Palestinian side from the Jewish side.  Things were definitely dirtier on the Palestinian side - again it felt a bit uncomfortable.  Especially with the graffiti (see the dove picture below).


Once we parked the bus, we started walking towards the Church of the Nativity, the traditional site where Jesus was born.  On the way, we could look down onto the shepherds' fields - Bethlehem itself sits pretty high on a hill. As usual, there were lots of peddlers around.  I normally ignored them, but I just could not say no to a little Palestinian girl with big brown eyes that was selling little wooden, hand-carved camels for a dollar.  I ignored the boy next to her just fine.


After getting my souvenir, we arrived at the Church of the Nativity.  There is a relatively large square outside where we gathered before heading inside, through a really tiny doorway.  I mean, really small.  I think our guide said it was built that way to make it harder for soldiers on horses to get inside quickly, for some reason.  I really got sick of the peddlers at this point, though - they swarmed the square peddling their junk.  But I guess it's no different today than it was back then.


After the extraordinarily long wait, we finally arrived at the door to the manger area.  I have to say, for one of the defining (traditional) sites of Christianity, seeing the manger was decidedly anti-climactic and disappointing.  We were rushed in and rushed out, barely given time to get a picture, and given no time to even reflect on the whole idea of being there.  But here are the pictures I managed to take as I was whisked through:

Once inside, we waited, and waited, and waited, with hundreds of other people inside this church, for our peek at the traditional spot where Jesus was born.  I think we must have waited 2 hours, at least.  And people were pushy, cutting in line - not what you'd expect from a crowd of supposedly mostly Christians waiting to see the place of Jesus' birth, but whatever.

Day 5 - Checking in to the Regency Hotel in Jerusalem

After the long day, we finally went to the hotel and checked in.  This was, I think, the nicest of all the hotels we stayed at.  Very large, very clean, very modern.  Large dining room which our group filled up.


In my next entry, I'll cover the next day of our tour, which included our visit to the Mount of Olives, Garden of Gethsemane, the Upper Room, and the shepherds' fields.  Until next time!
Posted by deltamike76 at 12:04 AM