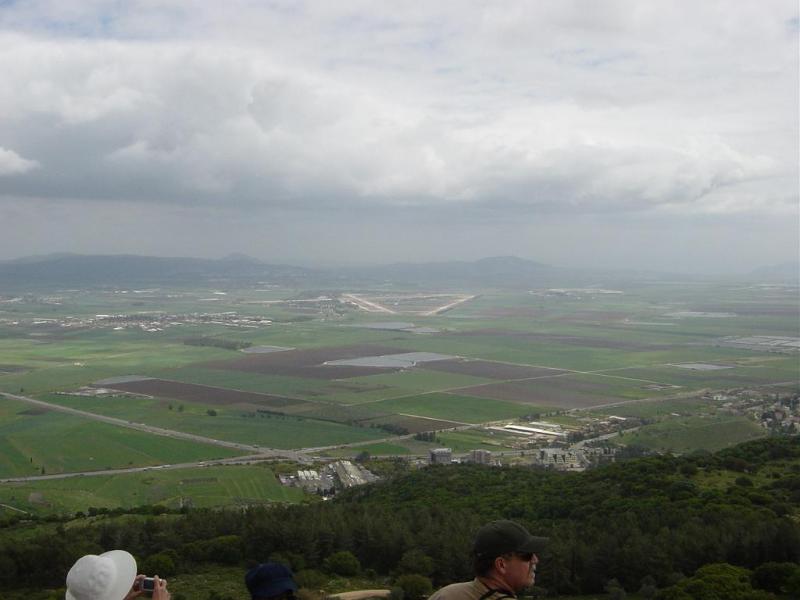 This is Part 5 of my account of our tour to Israel with The National Christian Choir.  This entry begins with our visit to Mt. Carmel, then continues on page 2 at Megiddo, ending up in Nazareth.  To start at the beginning, click here.  All my Israel pictures and videos are in the photo gallery under Vacations and Trips, then 2008 Israel.

From Ceasarea, we headed to the top of Mount Carmel.  I believe Gila told us this was the highest point in Israel.  This is also the place where Elijah challenged the 450 prophets of Baal (I Kings 18).  Harry again gathered all 300 of us on top of Mt. Carmel to tell the story.  The view from the top of the mountain was beautiful, as was the drive up the mountain.

These pictures do a good job capturing what the landscape was like throughout the part of Israel we were in.  It was really picturesque - green, rolling hills, just covered all over with both rocks and olive trees.

At the top of the mountain, there was a monastery (the Carmelite Order, I think they were called).  A statue there commemorates Elijah's victory over the prophets of Baal.  They maintained this cactus garden that I think Beth would have liked.

From the roof of the monastery, we had an incredible view of the valley of Armageddon, the prophetic site of the final battle.  The pictures really do it no justice at all - it really was a vast, flat area.  Gila pointed out a tree line in the valley where they say is the place that Elijah actually carried out the slaughtering of the prophets of Baal (I Kings 18:40).  There were a number of reasons she said they believe that was the place - sorry I don't remember them, but be assured it was very interesting. 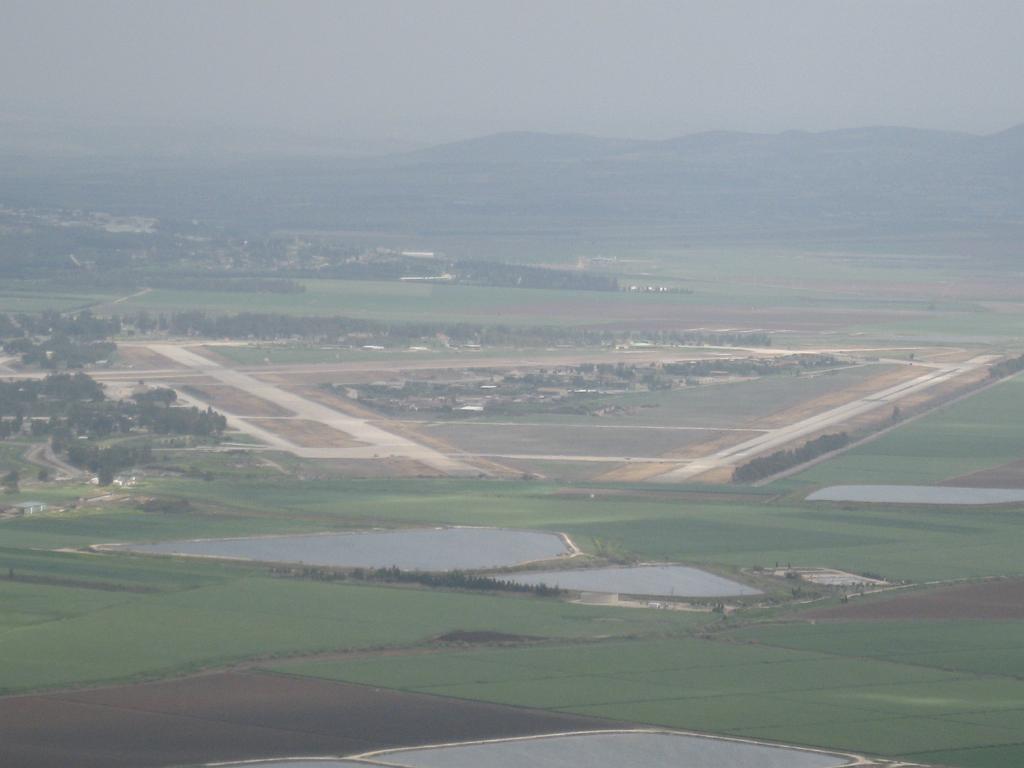 Did you notice the airfield in some of these pictures?  Several of us found this fascinating.  Gila told us that it is a secret Israeli air force base.  I'm assuming she was being sarcastic about the "secret" part of that, since everyone who comes here knows about it and takes pictures of it.  But what the rest of us found quite interesting, and perhaps a little prophetic, was that this air force installation is smack in the middle of the valley of Armageddon.  And given the fact that Israel assumedly has nuclear weapons, the Masada Principle, and the strategic location of this base to launch attacks, it's foreseeable that something awful could happen right here.  When Harry was talking to the entire group on Mt. Carmel, he was interrupted several times (and had to stop talking) by Israeli military jets departing the base.

From Mt. Carmel, we went to a place called Megiddo.  Actually, the formal Hebrew name is Tel Megiddo. A tel is a hill or mound which consists of multiple layers of city ruins.  So essentially, a city is built there, eventually is destroyed or left to become ruins.  Erosion over time leaves a mound, then someone comes along and rebuilds on top of the mound.  They apparently did this many times here - Tel Megiddo is made of up 26 layers of ancient city ruins.  It, too has a great view of Armageddon.  Several prominent battles occurred here, including the very first battle in recorded history in the 15th century BC between Pharoah Thutmose III and the Canaanites.

En route to Megiddo, we saw some caves along the road.  One of them had a Roman stone in front of it.  These caves were scattered here and there, but this was the best view of one with the Roman stone still with it.  When we arrived, we had lunch before going to the ruins.  The only food option was falafels, so falafels it was.  Neither dad nor I had them before, but it's apparently the "staple" street food in Israel, but unlike our fast food, this is nutritious.  It's basically a fried ball of chick peas, which you put into pita bread and top with various dressings.  I thought it was ok - not as bad as I feared it might be.  Dad didn't like it at all - probably because he didn't realize until later in the trip that it was chick peas, and he had thought the balls were made of some kind of disgusting meat. 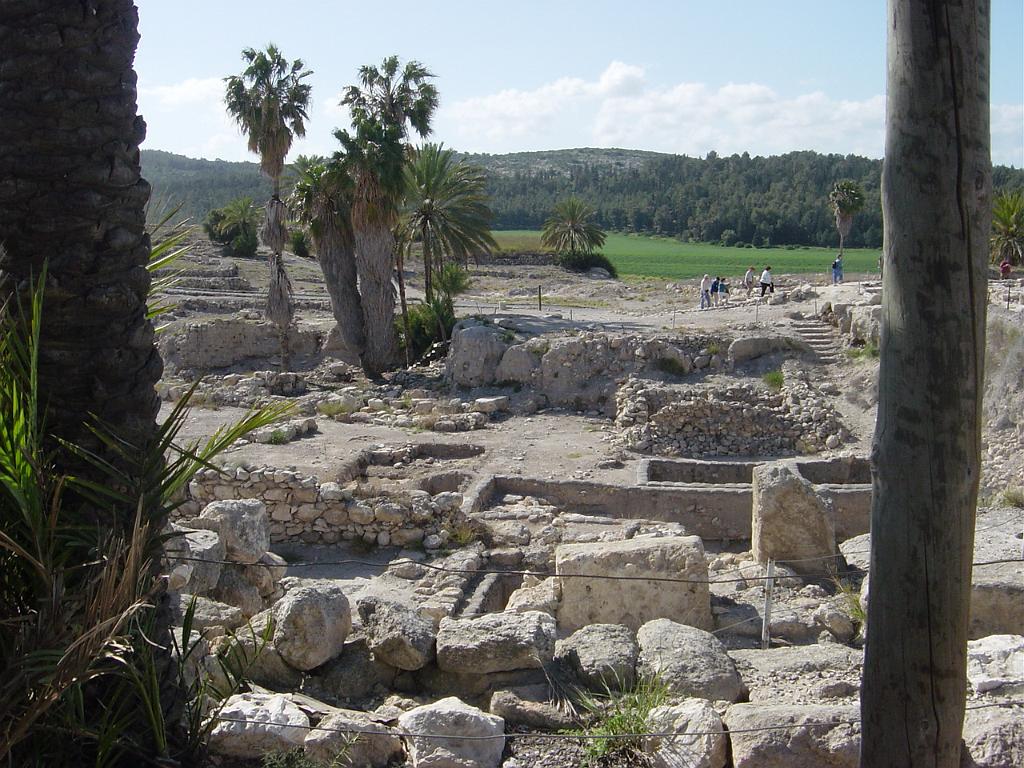 After lunch, we made our way to the city ruins.  Again, I didn't ever think ruins would be fascinating to me, but they really were.  They let you get a glimpse as to how the city actually was.  The third picture here shows the ruins of one of the large city gates that was built by Solomon (Megiddo is one of the cities fortified by Solomon). Inside were ruins of various buildings, including Solomon's stables.

From Megiddo, we looked across the valley and could see Nazareth, on top of a hill.  It struck me that so many cities in this part of Israel, at least, are built on top of the hills, rather than in the valleys.  I imagine there must be some good reasons for this - maybe protection, maybe to maximize the amount of flat land in the valley for farming… I'm not sure.  Gila also pointed out some hills that were to our right as we were facing Nazareth, and explained that Samaria was right there.  It was very interesting to hear her tell how even today, just as in Biblical times (John 4:9), Samarians do not like Jews, and are still nasty to them.  She avoids going there as much as possible.

A city needs to have water for it to survive.  There was a spring within the city, but it was quite deep. And after seeing the spring and how far down it was, I was really glad I wasn't a woman in Solomon's day.  Every day, probably multiple times a day, the women would have to walk down quite a few steps - I'm horrible at guessing how far down it was in feet - just to the entrance to a tunnel.  Inside the tunnel, you go down more and more - it seemed like we just kept going down and down, until finally we reached the water source.  The women would have to make that journey, then do it in reverse, carrying all the water they collected… each and every day.  I was tired just from carrying my digital camera.  They apparently didn't even have steps until Solomon decided to be nice and build them some.

After a very full day of sights and walking (if you were paying attention, we started very early at Ceasarea, then Mt. Carmel, then Megiddo, all in the same day), we crashed onto our buses and headed to our hotel in Nazareth.  Remember that Nazareth sits on top of a hill.  So did our hotel within Nazareth.  The view was great outside the lobby windows and over the hotel pool.  The hotel itself was beautiful.  The service, though, wasn't so hot.


The hotel was thoroughly unprepared to handle a group of our size.  The other hotels, knowing that 300 people were going to flood the entrance at once, were prepared and organized with multiple tables according to last name to handle the check-in process.  The hotel in Nazareth, when we arrived, only had one, maybe two, people on duty, and didn't seem to know what was going on when we arrived.  So, I sat down at a table and taught the card game Fluxx to some folks in the lobby.

The hotel had also not prepared the room for the choir's rehearsal that night, so, in the spirit of "Blessed are the flexible," we took over the dining room after dinner and had our rehearsal there.  I have to say that's the first time I've rehearsed in a hotel dining room for anything.  The rehearsal went very well, actually.  The hotel employees who were cleaning up obviously were really enjoying the music.  Several of them were holding up cell phones while we sang, sharing us with someone they know - one guy was even holding up two cell phones.  There were also several other hotel employees/guests who listened from the surrounding stairways and the hotel lobby, above the dining room.

After rehearsal, I think I headed to the lobby to play more Fluxx (and teach more people who had seen us playing earlier and wanted in), then headed off to bed. I did stop at the front desk to ask about an Internet connection, and I discovered that we Americans were quite polite compared to the locals and even visitors from other countries.  If you weren't aggressive and pushy, you'd get walked over, cut in front of, etc. Gila actually got annoyed with us at points on the trip because we were being so courteous to others that it was slowing us down and throwing off the schedule.  I guess I had always figured Americans would be the rude ones.

The next day, we headed for the Sea of Galilee, which is where I will pick up in my next entry.