This is Part 2 of my account of our tour to Israel with The National Christian Choir.  This entry begins with our stay in Tel Aviv.  To start at the beginning, click here.  All my Israel pictures and videos are in the photo gallery under Vacations and Trips, then 2008 Israel.

We stayed at the Dan Panorama hotel in Tel Aviv.  It was overall a very nice hotel.  When dad and I arrived in our room, we thought it was funny just how small the room was.  It was small.  It barely had enough room to fit the (single!) king bed, a desk, a night stand, and a dresser, and you didn't have much spare room to walk around. 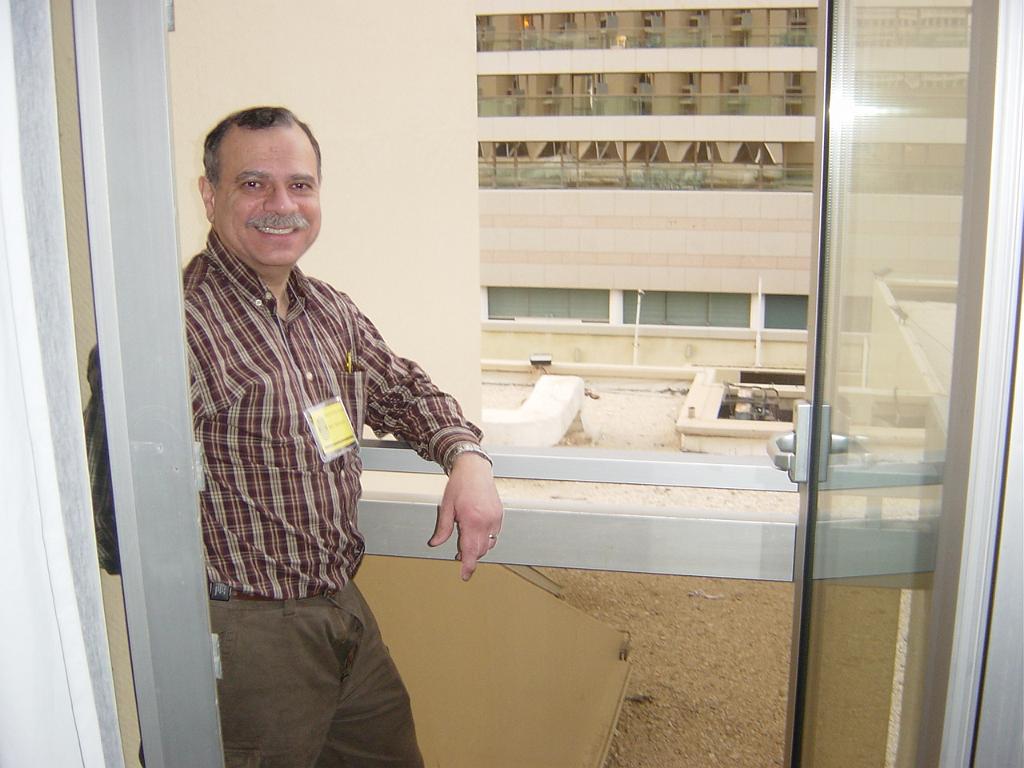 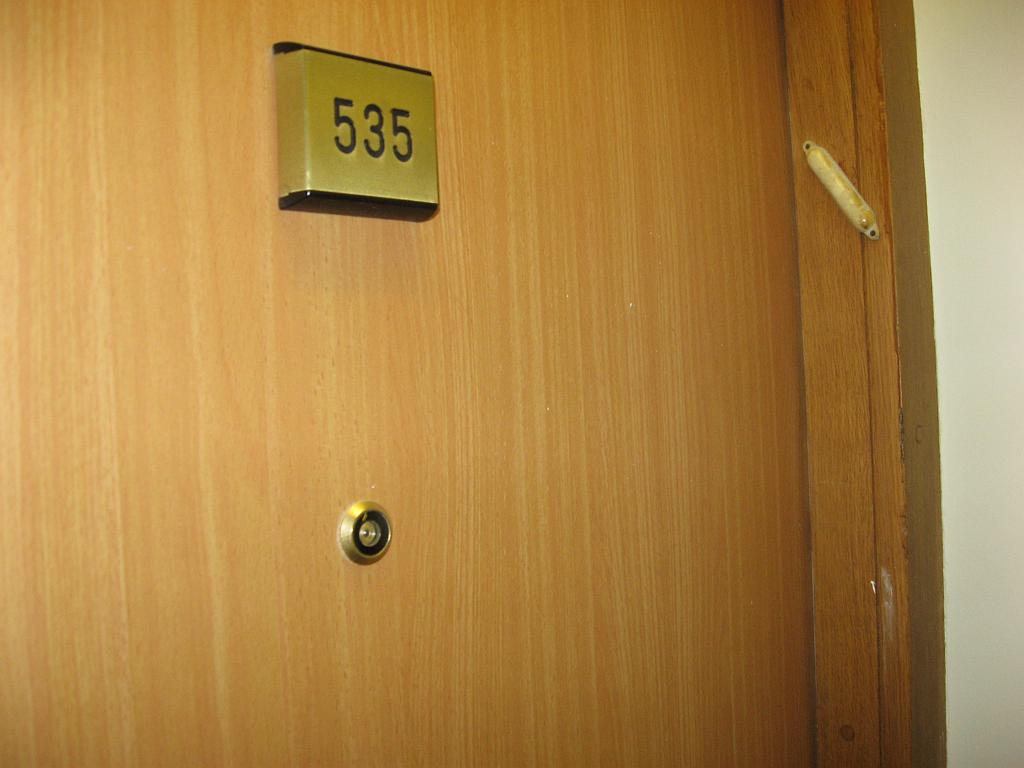 This was the lovely view from our balcony, which could maybe fit 2 people.  Here we are, practically right on the Mediterranean, and outside our door we can see the building across the street, and…. the roof of our hotel.  Every door in the hotel had these things attached to the side door frame.  I apologize to my Jewish friends for my ignorance - you're either going to find it funny or offensive, but I forget what these are called, and all I remember is that the Jewish guests will kiss their hand and touch it whenever they enter the room.  And there's no significance to it being attached at an angle other than aesthetics.  Now, there are only three rules of touring with the NCC:
BUT… sorry, I didn't want to share a bed with dad.  It's ok to say it - I'm immature.  He snores loudly!  And apparently, so do I.  And I didn't want to find out whether we'd fight over sheets all night long. Plus, this is our first evening in Israel, and we're doing our darndest to stay awake as long as we can, even though we're dead tired, to adjust to the new time.  I said I'd sleep on the floor, but dad was nice enough to call the front desk and ask about either splitting the king bed or getting another room. 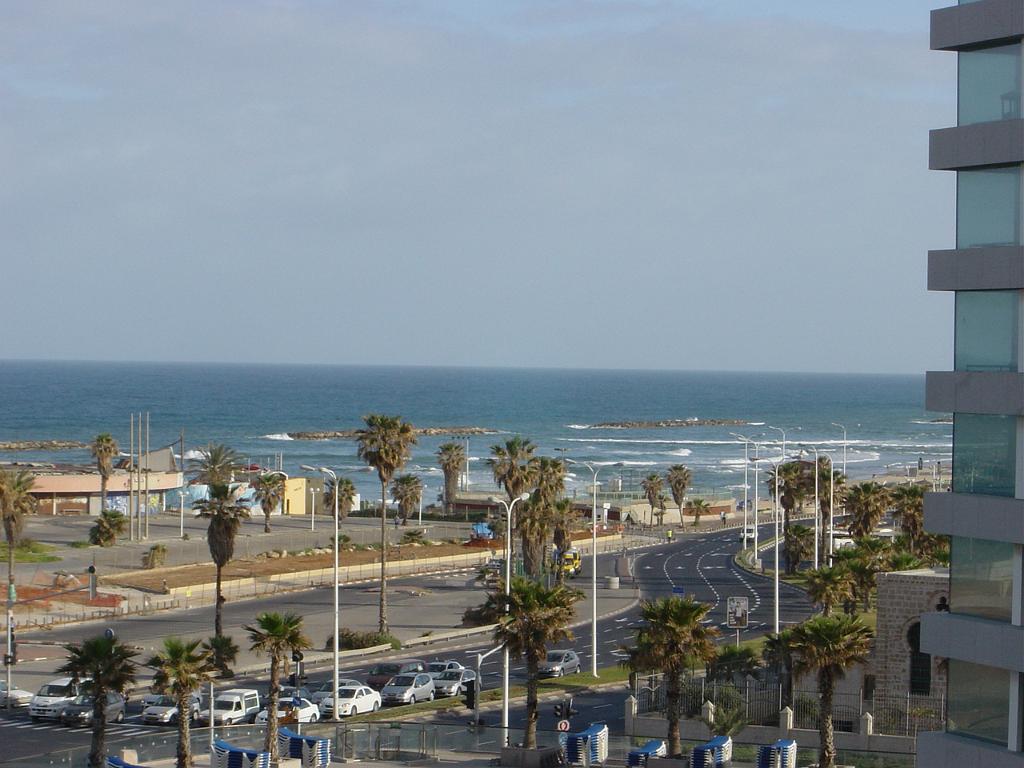 After some language barriers with a staffer that came to our room we think to simply tell us our bed couldn't be split, we did get a new room.  This was the view from the balcony of our new room.  Wouldn't you agree that it's a bit nicer? 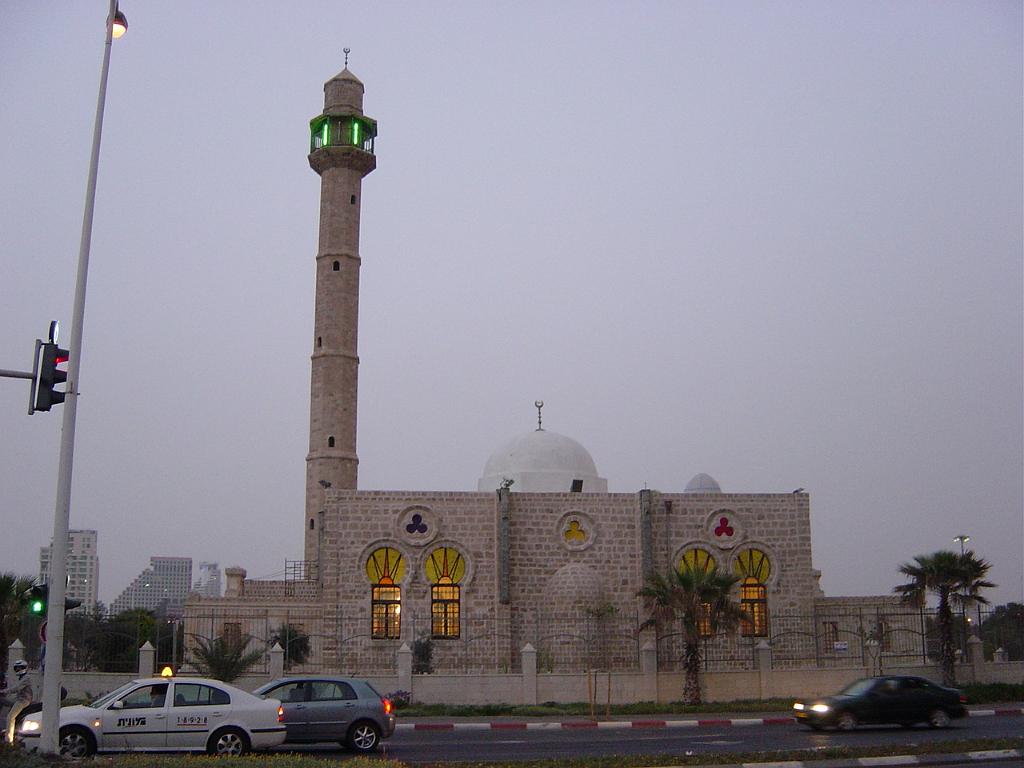 We ventured out of the hotel to walk around and kill time to stay awake.  We saw this mosque at the end of the block - I hadn't really seen one before.  The seafront right by the hotel was unfinished.  We had to walk through an unfinished strip mall as it was getting dark to reach some beach where there were actually people.  It was dark and hazy, so the view wasn't terribly great on the first night. 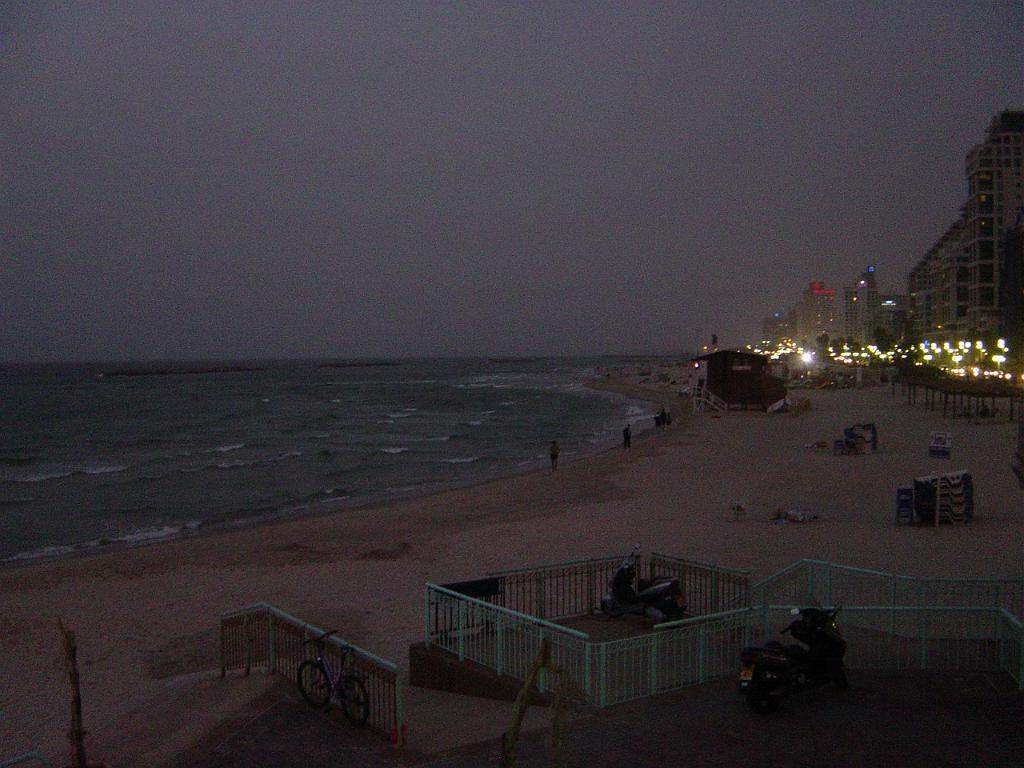 I was incredibly tired and crabby.  I frankly was not that impressed with Tel Aviv as we walked around that first night.  It seemed like any other city.  There were a lot of empty buildings, buildings missing windows, graffiti… all that plus the unfinished seafront kind of confirmed what the Israeli on the plane told us - that Israel is forced to spend so much on defense, that it frequently does not have much leftover for itself to develop and improve.  And our guide told us that it's very common for contractors to leave a job unfinished because they go bankrupt. 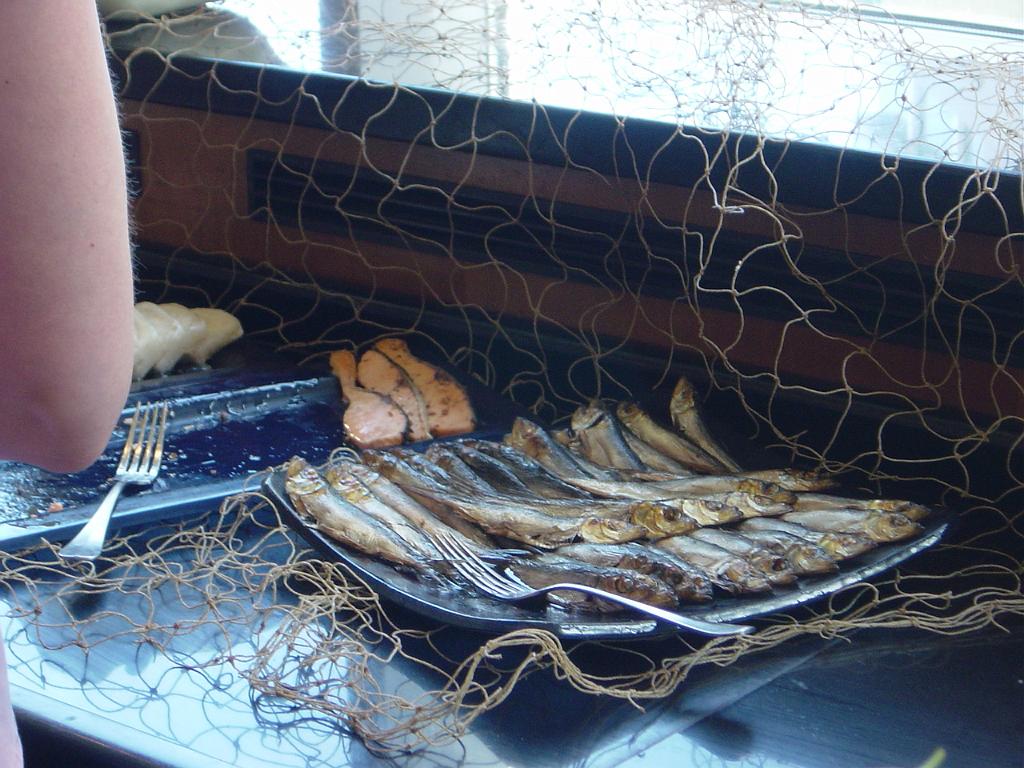 The next morning, we had breakfast at the hotel.  Of the three hotels we stayed at, I think this one had the best food, hands down.  The breakfast buffet was huge, with all kinds of cheeses, rolls, veggies, soups, eggs, even fish.  I had to take a picture of these fish that were out for breakfast - they still have their heads, even.  No, I didn't have any.  The juices were great, too - they had a guy doing nothing but squeezing out fresh juices: orange, grapefruit, strawberry, banana, mango, and carrot (blegh).  They also had tasty pancakes and waffles. 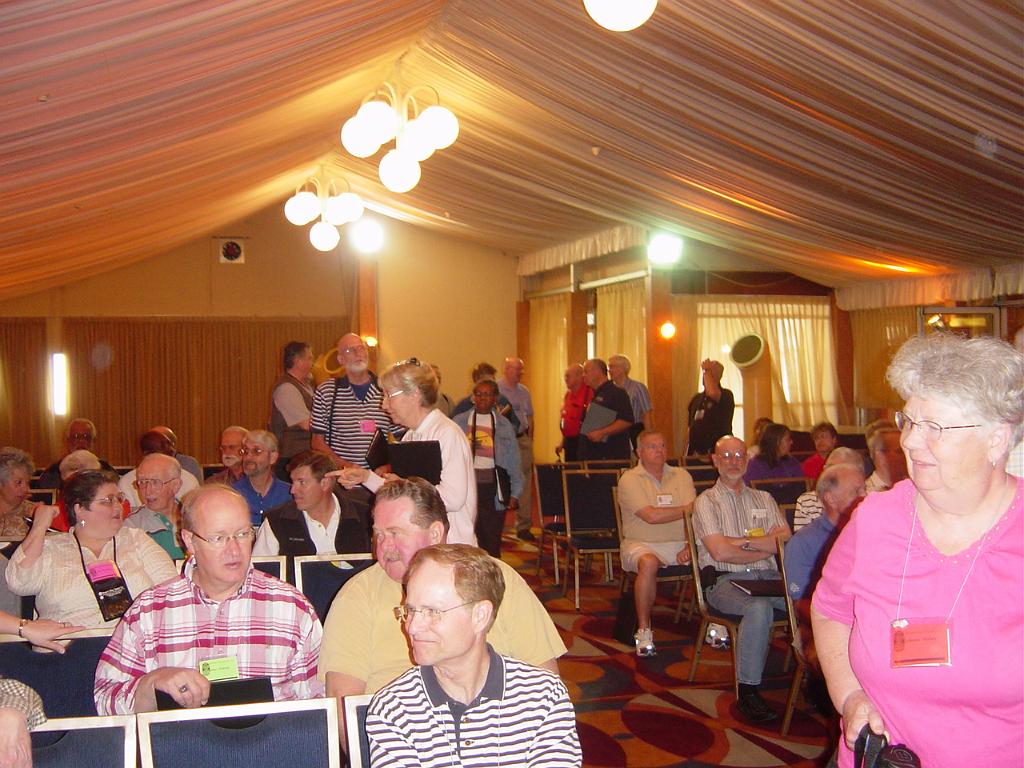 We had a 3-hour rehearsal after breakfast for the massed choir (the NCC members plus the additional 80 singers from around the country to join us).  It was neat getting to meet people from all over, and they were excited to be able to meet us in person (most had only heard us on the radio or on CD).  And they were really excited to get to sing with us. This was the first time we all sang together with most of the new people who had received music to memorize before the trip.  I think dad and the other non-singers were taken to a local museum - the Diaspora Museum, maybe it was called, that showed a lot of the history of the Jewish people and Israel.

Oh, I forgot to mention that during rehearsal, Harry (the NCC founder and director) told everybody about how his wife ran into a baritone that was eating just pancakes and eggs for breakfast.  I was sure he was talking about me, because I had eaten breakfast at a table right next to theirs.  He went on to chastise this baritone and tell the whole group that we're halfway around the world, in another country, and we need to branch out.  Fortunately, it became evident that he was talking about another baritone that had eaten pretty much what I had eaten for breakfast, and he was all embarrassed.  Afterwards, I let him know that I had his back and that I understood.

After rehearsal, we joined the non-singers on our buses.  There were about 300 in our group, so we took up 6 coach buses of around 50 people each.  Each bus had its own guide for the trip.  Our guide's name was Gila. She was extremely knowledgable and fun to listen to.  She seemed to know everything about wherever we went - even which peddlers to avoid and which people would definitely try to pick your pocket. 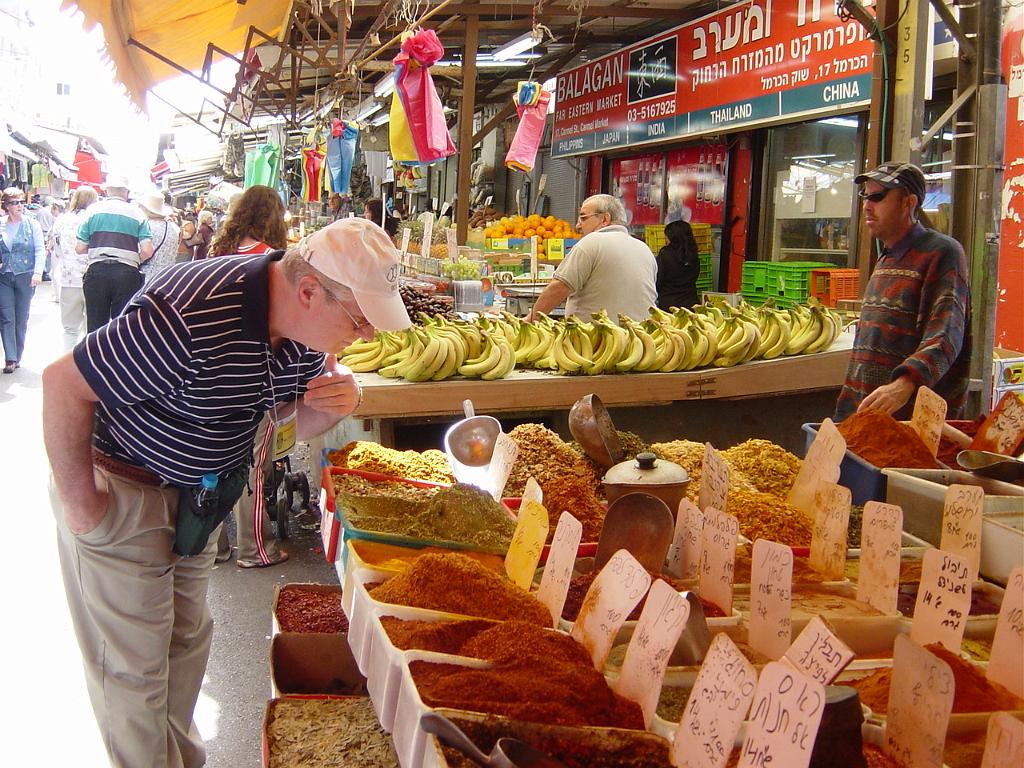 The buses took us to a marketplace in downtown Tel Aviv.  Dad and I had actually walked almost all the way to this place the night before - it was a hike. I forgot to mention that we had eaten in a local eatery.  Dad had schwarma, which is almost like an Israeli taco.  They cut some lamb or chicken from a spit, put it into pita bread, then you get to dress it with whatever they have available.  I had the hamburger and fries.  Oh, calm down… I branched out later. I had both falafel and schwarma before we left!  But I digress… 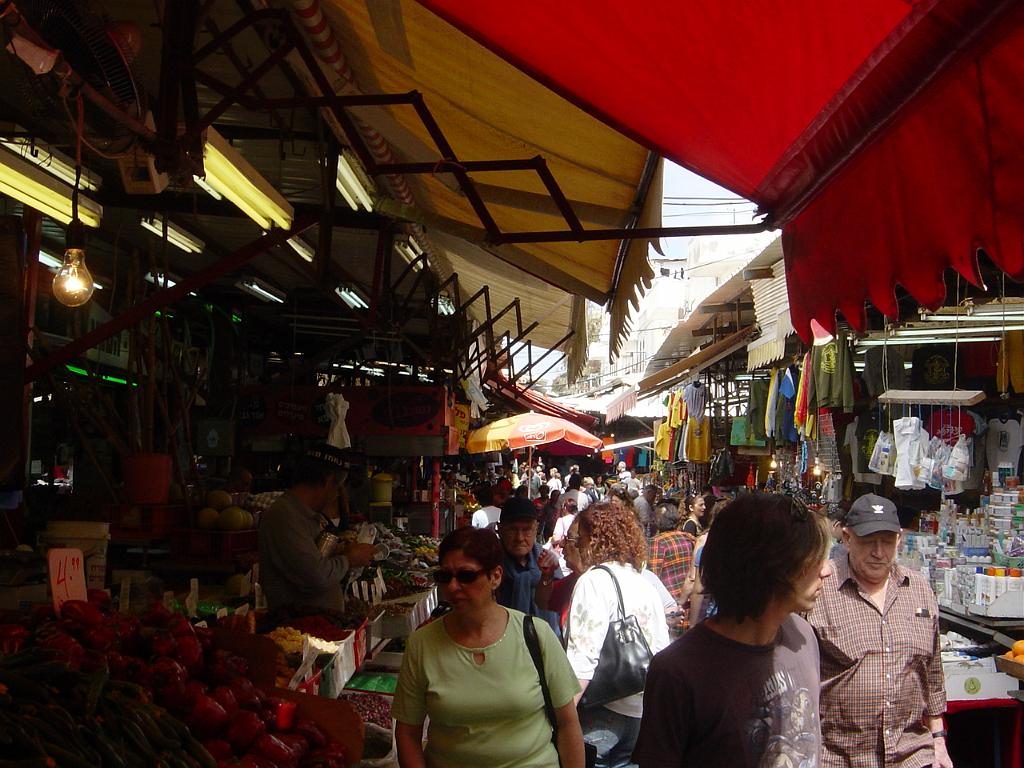 The market streets were very, very narrow.  Maybe wide enough for 2 or 3 people at the most side by side.  And there were just so many vendors.  Everything from clothes to jewelry to trinkets to food to luggage to spices to groceries… this really where most business is done.  Women were there doing their grocery shopping - I guess they're used to coming to the market every day and buying their food for the next day or two.  The streets seemed to be endless.  I couldn't imagine having haul all the stuff that the vendors had in and out of storage every single day.

While dad was eyeing a Burger King not too far away, I purchased…. something… from a vendor for lunch.  I don't know what it was called.  But it was essentially a pita that had some kind of spices slathered all over it.  A remarkably horrible description, I know, for what turned out to be a quite tasty treat. 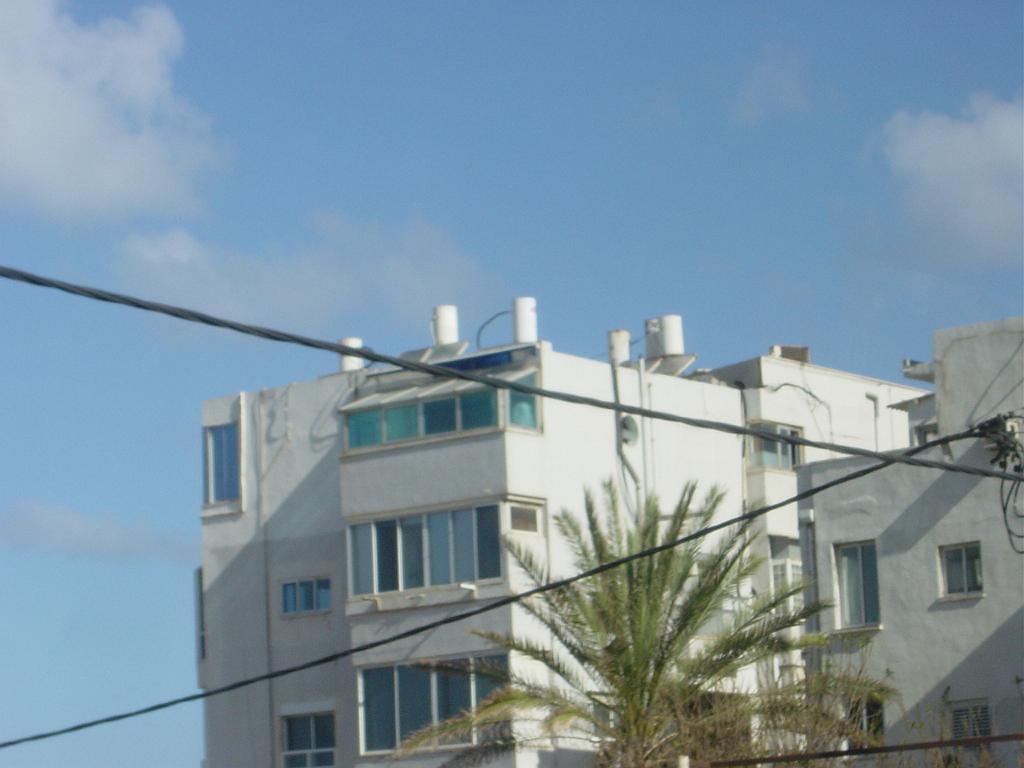 When our time was up at the marketplace, we piled back into the bus and headed for Joppa, where I'll pick up next time.  On the way, I snapped a picture of something I noticed and that Gila pointed out.  All over the place - not just in Tel Aviv, but the whole country - the buildings had these cylinders on the roof.  Gila told us that these are solar-powered water heaters, and this is pretty much the standard way that people get their hot water.  She also told us that sometimes the solar panels will crack in the weather extremes, rendering you without hot water until you can fix it.

In my next entry, we're off to Joppa.

Click here to go directly to Part 3 of the story.
Posted by deltamike76 at 8:29 PM