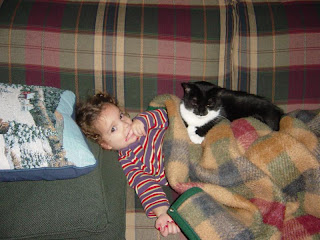 She's not very ticklish on her feet.  I've tried it several times, but it doesn't faze her.  In fact, it turns out she likes it.  When you stop "tickling" her feet, she'll grab your finger and pull it back to her feet to have you keep rubbing it.  She likes when you lightly caress her face with your finger, too.  If she happens to be sitting in your lap, relaxed, she'll grab your hand and pull it to her face.  Then she'll do it again if you stop. 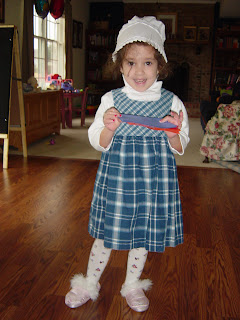 Last week I brought home a "surprise" on a couple days for the girls to entice them (well, to entice Anna, mainly) to eat their dinner.  The first time the surprise was a big chocolate chip cookie.  The second time it was gummy bears.  Beth brought the girls by the office this week to sign some papers.  Anna wanted to stay with me at the office and was sad when she had to leave.  On the way home she told Beth that she wanted a surprise when they got home.  It turns out the "surprise" was well-defined - she later revealed she wanted a cookie as the surprise.  She still likes to play hide and seek - only when it's her turn to hide and you finish counting, she yells, "Over here! Over here!!" 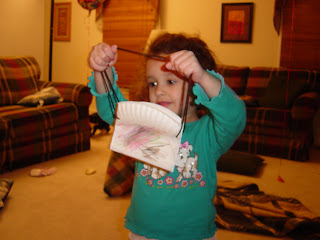 Yesterday at preschool everyone wore green, a leprechaun visited the school, and during chapel they learned all about Easter.  Did Anna tell us any of this?  No - when Beth asked what she learned in chapel, she said that Mrs. Sacardi said that the ants go outside.  Apparently, an ant had crawled onto Anna's hand, and it traumatized her, and her teacher had to reassure her that the ants live outside.  Anna still plays with a "money purse" that she made in Sunday school weeks and weeks ago.  She loves that money purse, which is a paper plate folded into a cup-like form with a string through it for the handle.

Last night at about 1am, Anna woke up screaming in terror.  Woke everyone up.  Cara woke up and was scared at the screaming and started crying herself.  I asked Beth what happened, and she said that Anna told her that she dreamed an ant was crawling on her hand and got scared.  I guess we know who's not going to be an entomologist.
Posted by deltamike76 at 6:28 PM