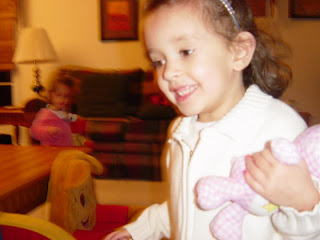 Anna and Cara have discovered the William Tell Overture, and they ask for it by name - "the horsie song."  When I was little, I remember searching through mom & dad's records looking for this song.  I didn't know the name of it; I only knew what the cover looked like.  My little sister and I would then act out a whole story to the full overture.  When it starts, we would be sitting on a ship on the calm seas, relaxing, maybe eating cereal, whatever.  Then the music starts to hint that something dramatic is coming, with the drip, drip, drip of raindrops.  We would look at the sky, very worried at what was coming.  Then the music builds and builds until it bursts into a violent storm at sea that tosses our ship every which way, and we'd roll and throw ourselves all over the floor. Finally, the storm subsides, and for awhile we find ourselves shipwrecked on a beach.  We look around for awhile, wondering where we are, until the final movement, when all of a sudden, we have horses!  And we ride and ride and run and run around and around all the way to the end of the song.  That was our whole play.

Anna and Cara don't really care to hear much of it except for the final movement with the horses. Although Anna does tiptoe during the "beach" music that leads up to the horsie part.  Someday I'll be able to teach them the whole story.

Click here to see a video I recorded yesterday of the girls running around and around to the William Tell Overture.
Posted by deltamike76 at 9:42 PM