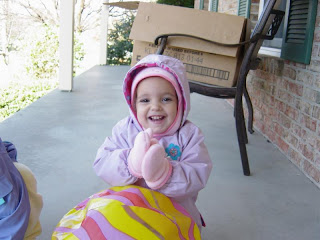 Does this look like an innocent face?  It's not.  Cara is growing fast, forever mischievous. She delights in taking something of Anna's, knowing that it will upset her, and run away with it.  It used to be Anna's kitty - now it's anything Anna might be playing with - maybe one piece of her puzzle she's working on, one of the crayons Anna's playing with, one of the necklaces Anna's wearing, etc. She also copies every little thing Anna does, whether it's sitting on the potty, getting a "pee-pee-pee" (meaning pee-pee-pill, meaning a piece of Pez candy) whenever Anna gets her vitamin, or "repeating" every story Anna tells us.

She has also gotten into the habit of wanting whatever anyone else is eating, much to Beth's chagrin. Cara is still a very good eater, and most of the time eats her own dinner.  Only then she'll want a bite of whatever you have, no matter what it is, or how much she's already eaten. And it inevitably turns out that she ends up eating half of your meal, along with her own. Too bad Anna didn't inherit any of Cara's appetite. Oh, she also likes to use her hands instead of her fork, especially with things like pasta and mashed potatoes, which she'll squish in her hands like lotion. She also loves butter - wants it on everything.  Sometimes when you ask her what she wants for dinner, she'll say, "Butter!" 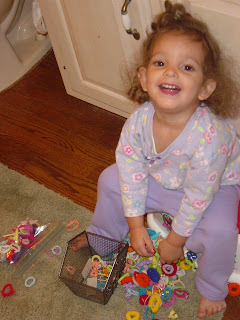 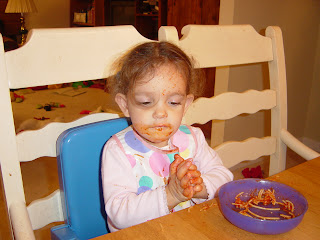 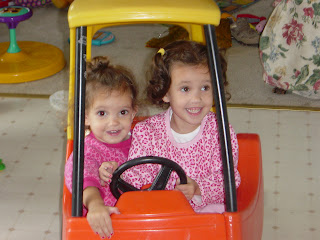 She's also recently discovered the little cat door that leads down into the basement.  She treats it like it's her own personal toy dispenser, of sorts, like a laundry chute.  She'll take a toy, open the cat door, and toss the toy through the door, letting it fall all the way to the bottom of the basement stairs.  She'll also empty a basket of toys onto the floor, simply to empty the basket of toys. 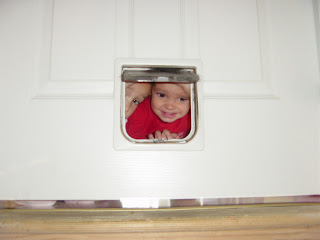 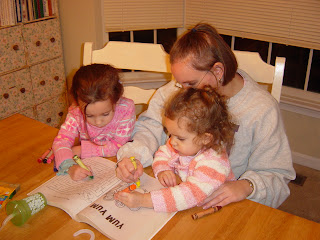 She loves the Little Golden Books, and she can very quickly empty them from the bookcase onto the floor as she looks at them.  One of those books is a counting book, where for #10, it says "Ten little monsters make a mess." I say that should have been written "One little monster makes a mess."
Posted by deltamike76 at 10:52 PM