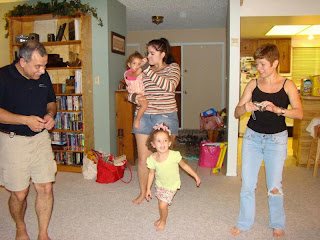 I thought at least one of my aunts would appreciate this. Beth was out running errands this morning, and I started playing some Spanish Christmas music.  When the first song came on, Cara started dancing on the couch, and Anna started wiggling her behind, then started running around the coffee table. Then, while Anna was running and wiggling to the music, she yelled, "Just like Titi Edna!!"  She was also carrying many of her Disney buddies, and saying "Come on, guys!"

Not only that, but when a couple more songs went by, Anna said, "Umm.. how about…. Edna song?"  It took a try or two to figure out which song it was, but it turned out to be Te Llegó La Parranda - the official Titi Edna song!

Video of Anna and Cara "Dancing" to the Titi Edna song after coming home from the reunion.
Posted by deltamike76 at 12:26 PM