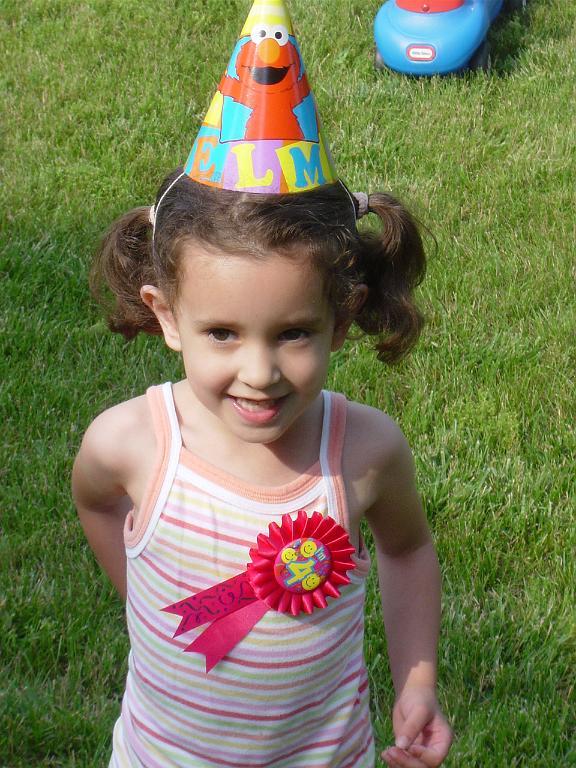 Yesterday (the 6th) we had a party for Anna's 4th birthday.  She was very confused because on the 5th (her actual birthday), we wished her a happy birthday, and she thought she was having a party that day.  After work I had done a big run to the grocery store for Beth to get both general groceries and things for the party.  When I brought the stuff home, I had to run back out to get more things for the party so everything would be ready (a new propane tank, for one).  So I wasn't actually home much on her actual birthday. Poor Anna - I don't know what she thought was happening, but she said, "This is the best birthday party EVER!" to Beth, when there was no actual party, no presents yet, and daddy wasn't even home.  I think she was confused when she went to bed.

Yesterday made up for it, at least, when she had her actual party, which she'd been looking forward to for months.  It was really a simple cookout with several friends from Beth's MOPS (Mothers of Preschoolers) group and friends from Anna's preschool.  The guys, of course, met for the first time.  But we had balloons, cupcakes, and a bunch of toys in the backyard to play with. I have to count in my head how many girls were there… I don't even know, maybe around 15 little girls?  Counting the boys is easy - there was only one!  Anna's friend Alex, who's deathly afraid of our black-and-white cats and asked me repeatedly to "put them away," even though we were outside and the cats were nowhere to be seen.  I forget what the game was, but at one point all the girls were chasing Alex around the yard.

Anna was too excited to eat her hot dog & baked beans, so she told us that she "didn't like it" and "wanted to play."  We let her, since it was her birthday after all.  She didn't have a problem eating 2 or 3 cupcakes later, though.  All the kids had a really fun time playing in the sprinkler when we turned it on.  At first Anna didn't want to get wet, so she stood far back and held her hands out to feel the water droplets.  But one of the other dads somehow convinced her it was fun, then picked her up and held her over the sprinkler and got her all wet - after which Anna repeatedly went back to him to do it again and again.  After the sprinkler, there were bubbles for everyone to play with.

Below is a short collage of some pictures and video clips from Anna's party (or click here for a high-quality version, ~25MB). All the pictures and raw video clips will be in the photo gallery, under Day-to-Day, 2008 Summer, Annas 4th Birthday.

It was a fun time, and all the kids had a ball, I think.  It was a little warm, but our backyard is shaded in the evening, so it wasn't too bad. It was good we had it yesterday because we have an excessive heat watch for the rest of the weekend, with heat indeces near 110 degrees.  The only casualty was after everyone left, when Cara let one of Anna's 11 balloons float off into the sky.  When Anna saw it, she screamed in horror then cried for her one lost balloon.  It didn't matter there were 10 others.